Diary of Minecraft Elias the Enderman Ninja vs the Doomstreak Clan 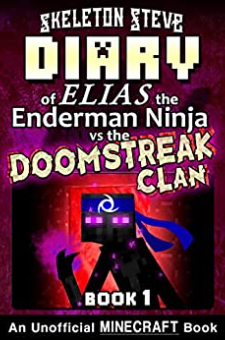 who love to read

about their favorite game!

Ever wondered what happened to Elias the Enderman Ninja after Noob Years Season 2?

is on the horizon for the world of Diamodia, and the terrible Doomstreak Clan is just the beginning...

Elias the Enderman ninja is ready for his promotion from 'initiate' to 'lower ninja' in his Order, and his

are long overdue. After defeating the Skeleton King, adventuring with Skeleton Steve, discovering

, and fighting off the terrible evil ninjas of the Doomstreak Clan, his ninja trials should be pretty easy to overcome, right?And after his promotion, it's no secret to Elias that he's going to be assigned to a

intending to hunt down the

at their under-ocean base to destroy all of the dark, evil Ender remaining on his world. But when Elias and his powerful friends encounter the

deep in the secret base, they run into serious trouble that will challenge the survival of even the most powerful ninjas...

Elias the Enderman Ninja vs the Doomstreak Clan

)Author's Note: This is an unofficial Minecraft book. Minecraft is a registered trademark of, and owned by, Mojang AB, and its respective owners, which do not approve, endorse, sponsor, or authorize this book.Minecraft®/TM & © 2009-2016 Mojang AB/Notch