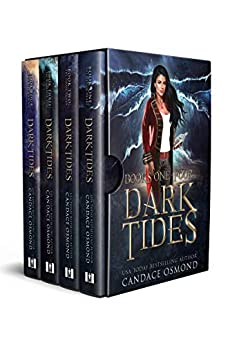 Fans of OUTLANDER and PIRATES OF THE CARRIBEAN give praise for The Dark Tides Series!

Get the first four #1 International Bestselling books PLUS a bonus short story! Grab yours today!

“A time travelling adventure that will give Outlander a run for its money!” – InD’Tale Magazine

BOOK ONE – THE DEVIL’S HEART
Find the witch. Return to the future. Don’t fall in love with the devil…
When Dianna Cobham accidentally breaks an enchanted ship-in-a-bottle she’s washed away to 1707 Newfoundland and taken prisoner aboard a pirate ship captained by the infamous Devil Eyed Barrett. Dianna fights to survive by proving herself indispensable to the crew, all the while forging a secret plan to get back home.

But when Dianna learns of the Devil’s vengeful mission to seek and kill her ancestors, her hopes for returning to the future transform into an elaborate plot to save her lineage. Can she charm the Devil’s heart and change his mind before it’s too late? Or will she sacrifice herself to save the man hidden underneath it all?

BOOK TWO – THE PIRATE QUEEN
Find the Key. Return to the Past. Save the Devil…
When Dianna Cobham accidentally breaks her only ticket back to the future, an enchanted snow globe, she finds herself stranded in her own time without Captain Devil Eyed Barrett, the love of her life. Dianna struggles with her emotions and readjusts to her old life, all the while forging a way back to 1707 to save the captain and her beloved crew of pirates from her murderous ancestors.

But after she uncovers the key to returning to the past, Dianna becomes lost and alone when discovering tragic news that The Devil’s Heart sits at the bottom of the ocean…along with its crew.

Just when she thinks all hope is lost, Dianna receives a sign that her captain may be alive. It’s a longshot, but she’ll take it. It’s a terrifying reality, being alone and stranded 300-years in the past…especially with a new life growing inside her.

BOOK THREE – THE BLACKENED SOUL
Sail to England. Return the enchanted heart. Save the devil’s soul…
Dianna’s in over her head.
The Queen is her ship now. Hers to sail with a crew to keep safe as they voyage across the Atlantic to stop Maria’s evil plan of killing her mother. The stress of responsibility, her pregnancy, and helping Henry deal with his PTSD has become a nightmare from which she has nowhere to run. Henry is suffering, refusing to let her in, and Dianna is worried that their love won’t survive the tumultuous journey ahead.

Just when she thinks all hope is lost, a massive storm hits and threatens to sink The Queen. By some miracle of fate, Dianna survives and finds herself alone, stranded on an island to fend for herself. But she soon discovers that the isle may not be as deserted as she thought.

Can she charm her way to safety and find her crew? Or will she be forced to stay on the island forever?

BOOK FOUR – THE SIREN’S CALL
Make a Wish. Listen to Your Heart. End the Devil’s Life…
As the crew reach the shores of England, the power of a wish weighs heavy on Dianna’s shoulders. What should be a simple task snowballs into an endless pit of questions and second guesses as Dianna’s yet to mutter the words that will finally put an end to their formidable journey.

Find her mother before Maria Cobham ends her life.

The mission is simple, yet so much stands in the way. Including Roselyn Wallace, queen of the port and an old friend from Henry’s past. Time after time, Dianna reluctantly crosses paths with the tall, dark beauty until she finds herself in a world of trouble. Can she dig her way out before everything she’s worked for falls apart? Or will the world Dianna loves wash away with the unforgiving tides?