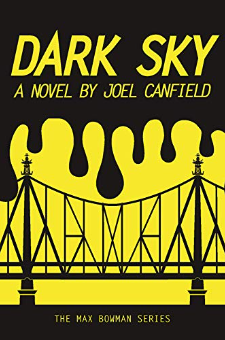 Max Bowman is a hero for today’s America—mostly because he has absolutely no idea what he’s doing.Years after being tossed on the trash heap by the CIA, Max is just getting by—and fine with it. Who cares if his future is in the rearview mirror? As long as he’s got a Jack Daniels in his hand and his creatively-foul-mouthed singer girlfriend on his arm, why shake things up?Then his old Agency boss shows up with a job that’s way above his paygrade—tracking down the truth about a war hero who was killed in Afghanistan. Because some people think this dead man isn’t so dead.Max treats it as a paycheck and a big fat waste of time. Until that house explodes. And a guy who looks a lot like the hero of a popular ‘60s TV Western puts a target on his forehead. Oh, and then there’s that secret para-military outfit in Montana, which wants to end his assignment in the most unpleasant way possible. It all happens in DARK SKY, a sardonic spin on the traditional thriller and the beginning of Max Bowman’s hilarious and harrowing misadventures.