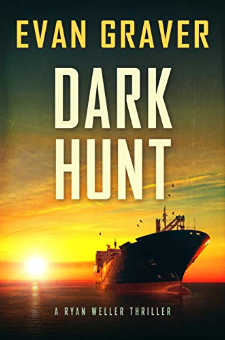 An ex-girlfriend ... A stolen freighter ... A hero caught in the middle When an old flame approaches commercial diver Ryan Weller to help locate a hijacked freighter missing off the coast of Haiti, he has no idea that hunting for the stolen ship will lead him again into harm's way. Captured by Syrian extremists hellbent on revenge, the missing vessel cruises across the Caribbean Sea with a single purpose, striking a catastrophic blow against the United States. Trailing in their wake, Ryan, a former U.S. Navy EOD tech, prepares a team to intercept the freighter at sea and halt the disaster that looms. But with time against him, can Ryan take back the ship and prevent a deadly terror attack before it’s too late? Dark Hunt is the seventh gripping thriller in the Ryan Weller Series, with Evan Graver once again delivering death-defying action in an exhilarating race against time. Buy Dark Hunt and dive into an ocean of crime today.