Cry in the Wilderness 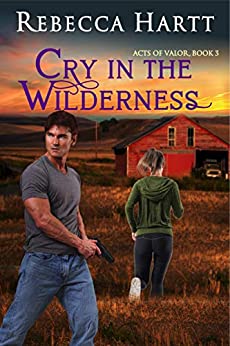 Navy SEAL Finds Freedom, Love and Redemption in the Christian Romantic Suspense, Cry in the Wilderness, by Rebecca Hartt

Rachel’s adoptive brother, a military lawyer, has managed to gain shared custody of her twelve-year-old son, Liam. Forced to live with her brother and endure his cruelty, Rachel promises her son they will escape to freedom and a new life. If only she can convince Blake’s best friend, Saul, to help them escape.

Legendary Navy SEAL Saul Wade is headed to Oklahoma to reclaim the ranch where he grew up. It’s bad enough Saul has to face his tragic past. Honor also demands he risk his entire career by helping a woman he scarcely knows.

What begins as a debt to a friend sets Saul on a journey of forgiveness, healing, and love. But when evil threatens his and Rachel’s burgeoning relationship, Saul is forced to make a life-changing decision—remain America’s top sniper or allow God’s grace to give him a whole new reason for living.

Publisher’s Note: Fans of Ronie Kendig, Lynnette Eason, Dee Henderson as well as Marliss Melton, Susan May Warren , and Colleen Coble, will enjoy this engrossing and heart-stirring series of redemption and rebirth.

Rebecca Hartt is the nom de plume for an award-winning, best-selling author of a different name who, compelled by her faith, decided to spin suspenseful military romance where God plays a vital role in character motivation and plot.

As a child, Rebecca lived in countries all over the world. She has been a military dependent for most of her life and knows first-hand the dedication and sacrifice required by those who serve.

Living near the military community of Virginia Beach, Rebecca is constantly reminded of the peril and uncertainty faced by U.S. Navy SEALs, many of whom testify to a personal and profound connection with their Creator.

Their loved ones, too, rely on God for strength and comfort. These men of courage and women of faith are the subjects of Rebecca Hartt’s enthusiastically received Acts of Valor romantic suspense series.