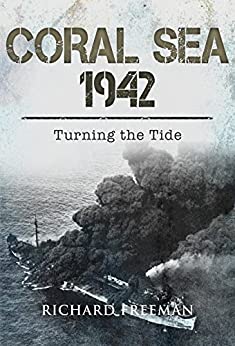 In May 1942, the Americans discovered the Japanese planned to take Port Moresby in New Guinea.
After suffering a devastating series of setbacks after Pearl Harbour, it was vital that US forces prevent another loss. Admiral Frank Fletcher was dispatched with two navy task forces and an Australian-US cruiser with orders to destroy the Japanese invasion force. This thrilling book by acclaimed historian Richard Freeman tells the dramatic story of that conflict.
Spread over four days, The Battle of Coral Sea was the first air-sea battle in history. With both sides initially only able to attack each other’s light carriers, Fletcher finally found his real prey on the final day of the battle: the invasion fleet of Sh?kaku and Zuikaku. Meanwhile the Japanese carrier planes mounted attack after attack on the Yorktown and Lexington. Ultimately, though Japan may have won the battle, it was an American triumph. Coral Sea 1942 is a brilliantly concise and insightful guide to one of the greatest naval battles of the 20th century.
Praise for Richard Freeman
’Especially rewarding for those whose historical interests straddle political and military history – Nathan Albright, Naval Historical Foundation
Richard Freeman graduated in mathematics before following a career in distance education. He now writes on naval history. His other books include Britain’s Greatest Naval Battle and A Close Run Thing: The Navy and the Falkland War.