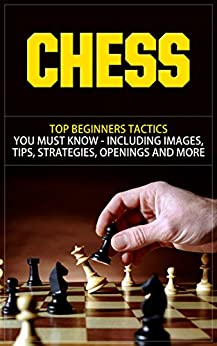 * * * LIMITED TIME OFFER! 2.99$ INSTEAD OF 4.99$ * * * Chess: Top Beginners Tactics You Must Know !Dominate Chess Tactics, Chess Strategies, Openings & Closings and Start Playing Like a Pro !This book will guide you through the basics of chess, from its origins to the rules of the modern game.By the end of the book, not only will you have an understanding of the rules of chess, but you will also be able to understand the top beginners strategies which if practiced will allow you to challenge some of the best players in the world.Chess is one of the world’s most popular board games, and is played by millions of people from all walks of life in parks, homes, online and tournaments. This two-player game is played on a checkered board with 64 squares arranged in an eight by eight grid called a chessboard. The game begins with each player possessing 16 pieces, 8 pawns, two rooks (sometimes called castles), two bishops, two knights, a queen and a king.The different player’s pieces are colored differently and are usually either black or white, though colors may vary. Regardless of the color variation though, each ‘team’ is referred to as either black or white. The objective of the game is to ‘checkmate’ the opponent’s king by placing it in such a position that it cannot escape capture. There are other methods to winning the game, such as when an opponent forfeits or resigns from the match. Forfeitures are normally as a result of the opponent losing too many pieces, or if a checkmate is seen as inevitable. There are also circumstances where the game ends in a draw for various reasons, meaning that neither player wins.The first official world chess championship was held in 1886 between Wilhelm Steinitz and Johannes Zukerfort. The victor and thus the first official World Champion was Wilhelm Seinitz. Since the creation of the World Chess Federation in Paris in 1924, the best chess players in the world have been awarded the title of Grandmaster, which is the highest accolade a chess player can get apart from world champion.The latter half of the 20th century saw computers being programmed to play chess, with many home computers now being able to play with such a high level of sophistication that they can outwit some of the best human players. The first computer to ever beat a reigning world champion was the computer Deep Blue, which beat Garry Kasparov in a match in 1997.What You're Going to Learn:Origins and History of ChessRules and NotationsMovements in the GameThe Pieces, Their Movements and ValuesChess Strategy and TacticsTips for BeginnersWhat Not to DoMore Tactics...And Much More!Ready to Play Like a Pro ?* * * DOWNLOAD YOUR COPY TODAY * * *