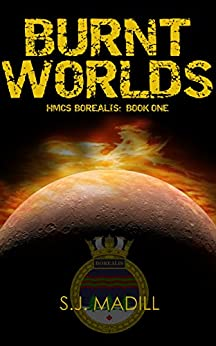 The commander of HMCS Borealis has a problem.  Several, actually, the most pressing of which is that he’s not even supposed to be in charge.  Disaster struck during the testing of a new jump drive, leaving the ship crippled and Lieutenant Dillon the highest-ranking officer still alive.At the far edge of the galaxy, beyond any hope of rescue, it’s up to Dillon to pull the survivors together and get the ship home. As he struggles with the unexpected burden of command, things go from bad to worse.A fugitive alien priestess arrives, her presence a diplomatic nightmare waiting to happen.  A mysterious ship follows them with murderous intent. And the Borealis’ desperate second jump lands them in uncharted space, surrounded by star systems full of dead planets.With supplies dwindling, Dillon and the crew of the Borealis find themselves in a race against time to solve a centuries-old mystery.  Can they stop an ancient enemy from being unleashed?  Or are all the planets of the galaxy destined to become burnt worlds?