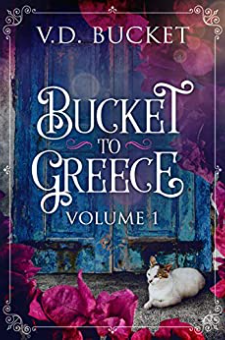 Bucket to Greece is a delightfully comical account of a British couple starting over in a new country, complete with imported cats, whilst discovering the joys and pitfalls of adapting to a strange culture. When our hero, Victor, needs a pseudonym to avoid embarrassing his wife after deciding to pen a book about moving to Greece, he dusts off his original name of V.D. Bucket, the name he was stuck with after being abandoned in a bucket as a baby. As Victor adapts to his adopted homeland he battles an obsession with the exacting hygiene standards he demanded during his illustrious career as a public health inspector against the rather less exacting standards of rural Greece. His attempts to master the complexities of the language lead to a number of embarrassing misunderstandings.Crossing paths with the local undertaker, Spiros, was a stroke of good luck for Victor and Marigold, since he just happened to have a house to sell in the charming Greek mountain village of Meli. Of course Spiros didn’t explain the strange arrangement of an Albanian living in the stone shed at the bottom of the garden, or mention the old lady’s next door filthy habit of burning plastic every morning. He also failed to mention his late uncle had plunged to his death from the roof terrace, but did a wonderful job of selling them on the spectacular views. If you’re a fan of Greek travel and culture, then this book is a must.