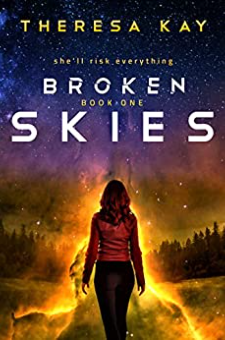 Jax will do anything to save her twin . . . even team up with a teenage alien left behind by the same ship that took her brother. She agrees to help the alien get back home, and in return, he agrees to sneak her into the alien city to find her sibling. Too bad it's not that simple. Jax soon finds that she's drawn to the alien boy with bright green hair and jewel-like scales on his back and he's equally affected by her, the courageous redhead with haunted eyes. But she doesn't know the alien's true motives, and he has no idea that she is much more than she seems.Worse, the connection forming between them has unknown consequences.The humans and the aliens are both hiding deadly secrets and the forbidden bond linking the two teens threatens to reveal everything. What started as an uneasy alliance and a seemingly straightforward rescue mission could spark an inter-species war. The Broken Skies series is a completed series filled with action, adventure, aliens, and romance. Perfect for fans of the Lux series, Under Different Stars, and The Fifth Wave. One click today to dive in!????? "A fast-paced and action-packed start to a series that will leave you reeling as you scramble for the sequel." - Kelly St Clare, USA Today Bestselling Author.???? "Broken Skies is a captivating read, and its appeal crosses genres. Whether you like sci-fi, dystopian, paranormal, or just anything with a hint of romance, check it out; it's got something for everyone."- FicCentral????? "I don't want to give too much away but take an alien/human love story, set it in a post apocalyptic type society, feature a strong but damaged heroine, sprinkle in a compassionate but secretive male lead, add in suspense, drama, shake and you have the wildly entertaining Broken Skies."-Shannon from Book Crushin