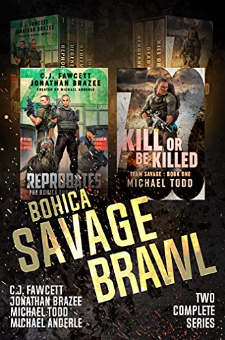 "What do you know about the ZOO?"Delve into the adventures and dangers The Zoo has to offer with two complete series set in an alien oasis in the desert. Get both The Bohica Chronicles and Team Savage in this 7-book boxed set.Born from the fertile imagination of bestselling author Michael Anderle.The BOHICA Chronicles:Kicked out of the military for brawling, what can three friends from different countries do to make some needed money?With nothing in their future, Former US Marine Charles, ex-SAS Booker, and ex-Australian Army Roo decide to give the Zoo a shot.Without the contacts, without backing, without knowing what they are getting into, they scramble to get their foot in the door to even make rent in one of the most dangerous areas in the world.With high rewards comes high risk. Can they learn on the job, where failure means death?Relying on their training, they will scratch, claw, and take the most dangerous jobs to prove themselves, but will it be enough? Can they fight the establishment and the Zoo at the same time?And what the heck’s up with that puppy they found?The Bohica Chronicles includes:ReprobatesDegeneratesRedeemablesThorTeam Savage Series:The former sergeant took in a deep breath, tilting his head as he looked at the man in front of him.“Unofficially? It’s a military experiment gone bad, with all the pros and cons that come with it. No official word was shared, of course. This means that I don’t officially know the source of the damn jungle starting to cover the Sahara Desert nicknamed the Zoo comes from some goop that was found on a missile that may or may not have alien origins."He stopped his explanation a moment and eyed the Retired Colonel in front of him, "Remind me, what is the government’s official stance on aliens again?”Anderson smirked, "The jury is still out on that one."Jeremiah Johnson needs a job, and Retired Marine Colonel Anderson needs a man with Johnson's particular skills.Fast.The Team Savage series includes:Kill Or Be KilledDead or AliveVengeance Or DeaethGo up and click on the 'Read Now' button and enter The Zoo where every day is a fight for your life.