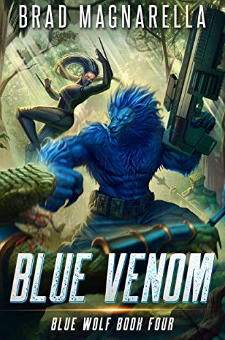 INTO THE HEART OF DARKNESS

With his time as the Blue Wolf winding down, Jason knows well the dangers of looking past the next mission. And Legion has just been called to its most challenging one yet.In a closed kingdom in Southeast Asia, a town of 5,000 people has disappeared from the map. Victims of the country’s tyrannical leader? Or targets of a shadowy reptilian race rumored to lurk deep in the rainforest?As the Blue Wolf and his team of hunters careen from fact-finding to zombie attacks to full-on jungle warfare, Jason begins to understand why his handler urged him to reject the mission—and the unthinkable consequences of failure.A poisonous force is gaining strength, warping minds and allegiances.And it’s starting to infect his teammates…

Blue Wolf is a feature series in the quarter-million selling Croftverse. If you like brawn, brains, and big weapons to go with an even bigger heart, you'll love the Blue Wolf!