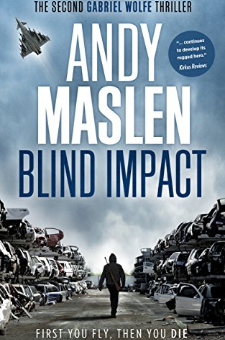 Flying a fighter jet while tripping is inadvisable.Flying it blind is suicidal.So when an RAF pilot suddenly loses his sight and crashes his Typhoon, answers are needed. Fast.British pilots are using an experimental performance-enhancing drug. SAS veteran Gabriel Wolfe discovers that someone is fatally sabotaging the top-secret testing programme. If the test succeeds, the UK will have a huge advantage over the Russians. An unholy alliance of Chechen separatists and Russian gangsters want it to fail.Two British women are snatched by the separatists. And the Farnborough Airshow is fast approaching. Gabriel has to rescue the kidnap victims and prevent another pilot’s death.The mission calls for street-fighting skills, military strategy and a stint undercover as a doorman for Jonny Rocketz. It's a sleazy bar in Talinn’s red light district owned by a Russian Mafia boss, Yuri Volkov.Gabriel is up for the challenge, but he’s still carrying guilt for leaving a comrade’s body behind in his last, disastrous mission for the SAS. Will it overwhelm him just when he needs to be at his most focused?Things get complicated when Volkov wants Gabriel to work with two of his own men.Tooled-up and heading for a confrontation with the Chechens, Gabriel has to keep one eye on his so-called allies, Erik and Konstantin, who have their own orders from Volkov.DOWNLOAD YOUR COPY OF BLIND IMPACT NOW