At the Stroke of Nine O’Clock 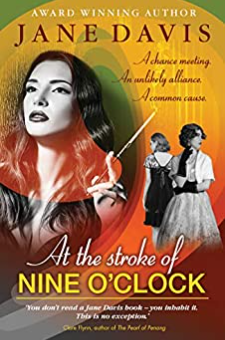 London 1949. The lives of three very different women are about to collide.'You don’t read a Jane Davis novel – you inhabit it. This is no exception.' Clare Flynn, author of The Pearl of Penang.Like most working-class daughters, Caroline Wilby is expected to help support her family. Alone in a strange city, she must grab any opportunity that comes her way. Even if that means putting herself in danger.Star of the silver screen, Ursula Delancy, has just been abandoned by the man she left her husband for. Already hounded by the press, it won’t be long before she’s making headlines for all the wrong reasons.Patrice Hawtree was once the most photographed debutante of her generation. Now childless and trapped in a loveless marriage, her plans to secure the future of her ancient family home are about to be jeopardised by her husband's gambling addiction.Each believes she has already lost in life, not knowing how far she still has to fall.Six years later, one cause will reunite them: when a young woman commits a crime of passion and is condemned to hang, remaining silent isn’t an option.“Why do I feel an affinity with Ruth Ellis? I know how certain facts can be presented in such a way that there is no way to defend yourself. Not without hurting those you love.”‘Another triumph from indie author Jane Davis in this gloriously gritty novel that engages head-on with a post-war London struggling to re-boot itself and wider society.’ ~ BurfoBookish'An extraordinary novel so rich and detailed you emerge feeling as if you've just watched a classic film.' ~ JJ Marsh, author'I didn't so much read as consume this book.' ~ VivienneTufnell, author'You are in the sure hands of a mistress of the written word.' ~ Alison Morton, author'Perfectly captures the spirit of an age, the transition between pre- and post-war Britain and the changing role of women.' ~ Kathleen Jones, author'Before the reform of an archaic legal system, before second-wave feminism, before the #MeToo movement, the idea that the future is yours to make as a woman is an illusion.' ~ Book Witch'One of the best books I've read this year.' ~ Denny