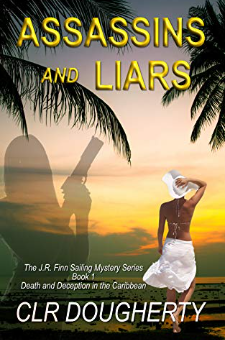 A man with secrets meets a woman on the run.Finn can't discuss his career; it's classified. He's about to leave Puerto Rico on a mission when he meets Mary. She wants to hitch a ride on his sailboat; she doesn't care where he's going. Finn thinks she's a rootless kid looking for adventure. He'll take her along; she'll provide cover for his clandestine activity.They're preparing to leave when Finn learns there's more to Mary's baggage than her backpack. He has second thoughts about giving her a ride, but it's too late. They need to get away from Puerto Rico in a hurry.As they sail down island, Finn grows fond of Mary. She's had a run of bad luck, and he's sympathetic. When they reach their first stop, they discover that she didn't leave her troubles behind.What's Finn gotten himself into? Read *Assassins and Liars* and find out.