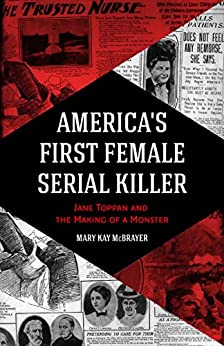 This is Capote’s In Cold Blood for serial killer enthusiasts: meticulously researched, superbly written, and incredibly vivid. Don’t miss it.” —Gabino Iglesias, author of Coyote Songs
America’s First Female Serial Killer novelizes the true story of first-generation Irish-American nurse Jane Toppan, born as Honora Kelley. Although all the facts are intact, books about her life and her crimes are all facts and no story. Jane Toppan was absolutely a monster, but she did not start out that way.
When Jane was a young child, her father abandoned her and her sister to the Boston Female Asylum. From there, Jane was indentured to a wealthy family who changed her name, never adopted her, wrote her out of the will, and essentially taught her how to hate herself. Jilted at the altar, Jane became a nurse and took control of her life—and the lives of her victims.
“A thoughtful and inspired take on one of the greatest poisoners in history. America’s First Female Serial Killer: Jane Toppan and the Making of a Monster seethes with rage, compulsion, and a righteous condemnation of the servitude of the underclass. A chilling and sobering read.” —Robert Levy, author of The Glittering World
“McBrayer offers us a complex—and terrifying—portrait of a killer who seemed almost doomed from birth.” —Kate Winkler Dawson, author of American Sherlock: Murder, Forensics, and the Birth of American CSI
“Brings the horrifying true story of Jane Toppan to lurid, novelistic life, and forces the reader face-to-face with the thoughtlessness and cruelty that helped turn a gifted, damaged child into one of America’s most legendary killers.” —Shaun Hamill, author of A Cosmology of Monsters