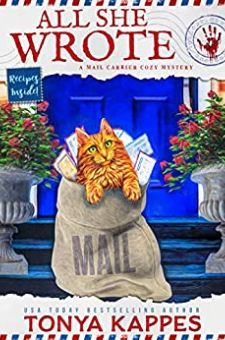 Welcome to the southern small town with endearing citizens, adorable animals, a smidgen of gossip with a touch of humor where there are twists and turns around every corner as they solve a local murder.Mail carrier, Bernadette (Bernie) Butler, along with the Front Porch Ladies, are curious of their new neighbor, Courtney Gaines, who is the niece of Florence Gaines, the wealthiest widow in Sugar Creek Gap. Florence lets it be known that she is seeing Zeke Grey, which doesn't set well with the Front Porch Ladies. They were all in competition for Zeke's attention.Shortly after learning that Florence, who announced it rather loudly, that she and Zeke got married, while delivering the mail, Bernie overhears what could be the first marital spat.As Bernie is happily awaiting the birth of her first grandchild, her best friend shares a feeling that something isn't right between Bernie's son, Grady, and her daughter-in-law, Julia. Grady seems to be very chummy with Courtney, which has Bernie singing high praise of Julia and how there is a new baby on the way. When Florence turns up dead in mulch, coupled with what Sheriff Angela Hafley mentioned, Bernie can't help but want to get involved and when Sheriff Angela requests Bernie to be a 'snoop consultant', she readily agrees. Bernie's snooping leads her to information that hits a little too close to home and Bernie enlists her best friend, Iris for help.