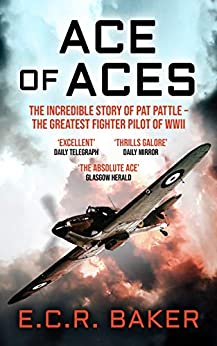 ‘Pat Pattle was a legend in the RAF … he was far and away the greatest ace the Middle East was ever to see, with an astronomical number of victories to his credit’ Roald DahlIn terms of enemy aircraft shot down or destroyed, Squadron Leader Thomas ‘Pat’ Pattle was the greatest fighter pilot of the Second World War.A South African who flew with the RAF, Pattle was an airman of outstanding skills and leadership who became the Allies’ top-scoring fighter pilot after winning scores of stunning victories in deadly aerial combat.But for years after the war ended, Pattle was virtually an unsung hero because the records of his extraordinary achievements were destroyed amid the turmoil of war.Compiled with the help of surviving pilots and members of the squadrons with which Pattle fought in the air over Greece, ACE OF ACES is a gripping and authoritative account of his amazing flying career, and the book which finally brought Pattle the recognition he so richly deserved.***‘This book … deserves the attention of serious historians of WWII and leaves no doubt Pat Pattle was an outstanding pilot’ Flying Review International‘Thrills galore’ Daily Mirror‘Sleuth-like Baker has built up a case to put Pattle to the top of the list of British Aces’ Scotsman‘The absolute ace of the RAF’ Glasgow Herald‘Excellent’ Daily Telegraph‘As a flyer and aerial shot, (Pattle) was unbeatable’ News of the World‘One of the unsung heroes of the war in the air, a brilliant pilot and tactician’ Evening Chronicle‘Pat Pattle was in fact the greatest fighter pilot in the RAF in WWII’ Yorkshire Post