A Way Through the Sea 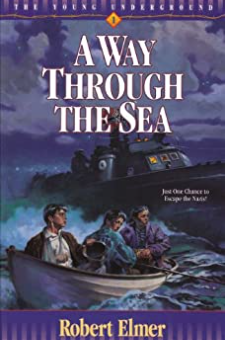 For eleven-year-old Peter Andersen and his twin sister Elise, living in the city of Helsingor, Denmark during World War 2 means German soldiers in the streets, German patrol boats in the harbor, and German fighter planes in the sky. Everyone is nervous, especially their Jewish friend Henrik and his parents. Of course, before the invasion, no one in Denmark cared whether a person was Jewish. But now the Nazis are secretly rounding up all of the Jews who live in Denmark and sending them to prison camps in Germany. Suddenly, Henrik and his family must escape! Sweden offers the only place of refuge, but with soldiers lurking the streets and Nazi boats patrolling the sea, only a miracle can get the Jews to safety!