A Season for the Ages 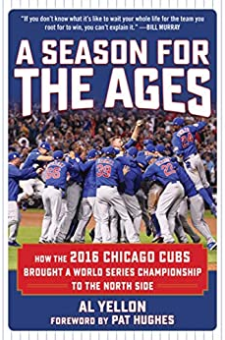 No doubt, you’ve heard about the Cubs’ decades-long run of futility. They hadn’t won a pennant in seventy-one years or a World Series in a record 108 years. To the frustration of Cubs fans everywhere, the team often missed chances with soul-crushing defeats.But after a complete teardown that resulted in a 100-loss season in 2012, Theo Epstein and his baseball staff reversed that with the Cubs of 2016, a team that was not only supremely talented, but cared nothing for all the media narratives of losing. They did things during the regular season that no Cubs club had done in more than a century, including earning the most wins for the franchise since 1910. The club went on to defeat the San Francisco Giants and Los Angeles Dodgers in the National League playoffs before beating the Cleveland Indians to win the World Series.Anthony Rizzo, MVP candidate Kris Bryant, Jake Arrieta, Jon Lester, manager Joe Maddon, and fan favorites like Javier Baez and David Ross are the heroes of the 2016 Cubs’ story. Told by Al Yellon, managing editor of SB Nation’s Bleed Cubbie Blue, A Season to Remember chronicles not only the 2016 Cubs’ rise to the top of the baseball heap, but the team’s—and the fans’—long journey to get there.