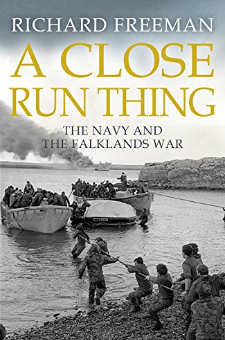 In 1982, Argentina invaded the Falkland Islands, triggering the last great naval battle of the 20th-century. The British Task Force sent to re-claim the islands was the largest amphibious landing since D-day in the Second World War.In this ground-breaking essay, the acclaimed naval historian Richard Freeman tells the story of Royal Navy in that momentous campaign. The ships had to transport the men, their machines and equipment, but also to supply them at a distance of nearly 8000 miles from their home ports. This the Navy did while under constant attack from missile-laden Argentine aircraft. The cost was high, with around 1,000 killed and wounded sailors and the loss of seven ships, twenty-four helicopters and ten fighter planes.This dramatic, enthralling book tells the story of the naval war, and the men and ships who fought it. At the time the whole operation was hazardous in view of the depleted state of the Fleet. Today it would be impossible.Richard Freeman graduated in mathematics before following a career in distance education. He now writes on naval history. His other books include The Great Edwardian Naval Feud.