A Bride for a Rogue 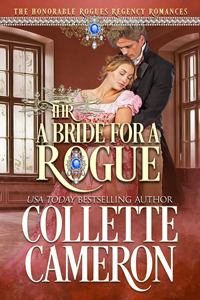 She can’t forget the past. He can’t face the future. Until fate intervenes one night.

Many years ago, Ivonne Wimpleton loved Chancy Faulkenhurst and hoped to marry him. Then one day, without any explanation, he sailed to India. Now, after five unsuccessful Seasons and a riding accident that left her with a slight limp, her only suitors are fortune-hunters and degenerates. Just as Ivy’s resigned herself to spinsterhood, Chance unexpectedly returns.

Upon returning to England, Chance is disillusioned, disfigured, and emotionally scarred, but his love for Ivy remains is strong. However, he’s failed to acquire the fortune he sought in order to earn permission to marry her. When he discovers Ivy’s being forced to wed to prevent a scandalous secret from being revealed, he's determined to make her his bride.

Except, believing Chance made no effort to contact her all those years, Ivy’s furious with him. What’s more, in his absence, his father arranged a profitable marriage for Chance. As he battles his own inner demons, he must convince Ivy to risk loving him again. But will their parents’ interference jeopardize Chance and Ivy’s happiness once more?