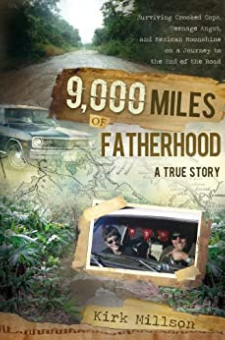 “And with that we struck the most important bargain of all: If I ever said something unfriendly I would pay him a fine, the amount determined by the severity of the infraction. Lobbing an F-bomb, for example, would cost me 50 pesos. Raising my voice would cost me 5[…]‘Well, that’s my plan,” I added. “What do you think?’Peter sat quietly for a few seconds before a smile slowly spread across his face.‘I think I’m going to be rich.’”Forced out of his high-ranking editorial position at the local newspaper, Kirk Millson couldn’t bear the thought of starting all over and crawling back to the copy desk. So when his new boss offers him a leave of absence, Kirk jumps at the chance to realize his dream of driving the more than 4,000 miles from Salt Lake City to Panama’s Darien Gap. His wife readily consents, with one minor catch: He has to take his son Peter along for the ride.Follow Kirk and his emotionally estranged 13-year-old son on a four-month long journey in this true, no-frills travelogue. In spite of robbers, corrupt law enforcement, and their sub-par Spanish, Kirk and his son Peter undergo astonishing transformations. 9,000 Miles of Fatherhood is the hilarious yet hair-raising memoir that follows a timid boy’s rise from D-student to straight-A academic juggernaut and his father’s rediscovery of a purpose far greater than the job he left behind.