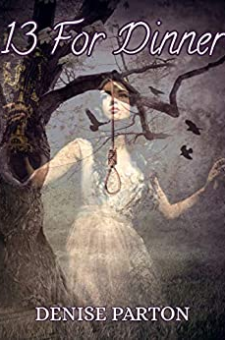 When Averie agrees to sit in as the fourteenth guest at an exclusive dinner party to rescue the other attendees from bad luck, it’s her who needs rescuing when all hell begins to break loose. Averie Cooke has never set foot on the old Faulkner plantation. She refuses because of the macabre history surrounding it, and the fact everyone says is haunted. A hundred and fifty years ago a slave by the name of Lunar Wilson was hung there. His lifeless body dangled in the breeze along with the Spanish moss. Later that same night, the petite southern belle, Emily Faulkner wrapped a thick rope around her delicate neck and joined her lover in the afterlife. Legend says all hell broke loose after that. Unaware that their only daughter was hanging dead in the cupola, Emily’s parents continued on with their festivities, gorging themselves on prime rib, and guzzling expensive wine. They were pretty drunk by the time Lunar’s brothers burst inside the house slinging their hatchets, vindicating their brother’s murder. They decapitated James Faulkner, his socialite wife Elizabeth and dismembered all eleven-dinner guest. The massacre was the bloodiest ever recorded. So why would Averie agree to sit at the same table, on the same night, a hundred and fifty years later? She needs the money that’s why. However, she gets much more than she bargains for when she and another mysterious guest transports back to the year 1859, exactly one month before the fateful event. Things go from bad to worse when she discovers the only way back home is to stop the hanging. Can she put her fear aside long enough to change the past?Thirteen for Dinner is a page turning thriller that will have you on the edge of your seat. Dealing with issues such as racism, slavery, hatred, and fear you’ll discover the only weapon that has the power to damage them all is love.